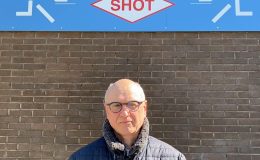 Watch and listen here to our chairman Frans Lambi with a message regarding the closure of Shot in connection with the Corona virus. 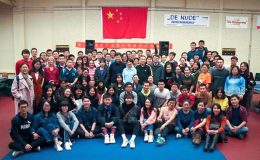 Upon the opening of the event, Frans welcomed all players and friends to the newly opened SHOT play hall and introduced the club. Mr. Geert van Rumund, the mayor of Wageningen, welcomed everyone to Wageningen and introduced the city, as well as its tight connection with China. Mr. Ken WU, ambassador of China to the Netherlands, expressed his excitement in participating this event, as well as visiting Wageningen again. Further, Mr. Wu addressed the ever-improving relationships between the two countries. He acknowledged the importance of Wageningen and Wageningen University in promoting the bilateral relationship between China and the Netherlands.

Wagenigen has always been a strong competitor in the Chinese student table tennis events in the past years. Karen, Xinyou, Xu, Matt and Alex, all from SHOT, represented Wageningen this year in this tournament. Team Wageningen was in the same pool with Rotterdam, Groningen, Nijmegen, and Leiden-Den Haag. Wining easily against every team, it was a close match between Wageningen and Rotterdam, led strongly by 2nd divisi-on player Tony Hou and “hoofdklasse” player Theo Xu. Matt pulled out an amazing perfor-mance winning against both of them. Despite a defeat in the women’s single, Karen fought strong in the mixed double with Alex and secured the no.1 position for Wageningen in the pool.

After an easy victory against the no.4 from the other pool, the team entered semi-final to face team Amsterdam. The first match was extremely close between Matt and the oppo-nent, where Matt eventually won with 3-2. Karen lost in the women’s single in a close match too, but yet again, she made the mix double looked easy with an overwhelming 3-0 victory with Alex. The 4th match was a spectacular game-of-attack between Alex and the player who almost took down Matt in match one. Eventually, Alex sealed the deal with a 3-1 victory to see team Wageningen in the final against, again, team Rotterdam, who beat another strong team of Delft with 3 first class/hoofdklasse players.

The final was tough. Matt faced Tony in the first match and managed to get a 2-0 lead. However the heavy match load for Matt, who has been the anchor of the team, started to kick back. Having suffered from a cramp in the 4th game, Matt lost in five. Karen, however, managed to win her women’s single match in a thrilling five setter. The mixed double was a surprise as Alex and Karen lost to the opponent against who they won easily in the group stage, with every set at a margin of 2 points. The fourth set was a difficult match for Alex as he had to face Tony. However, Alex did play well and kept it tight with 9-9 trailing with 1-2 in games. Unfortunately, the luck hit him with a netball at the most crucial mo-ment and cost his game.
In the end, the top four teams were Rotterdam, Wageningen, Delft and Amsterdam.

The Chinese Association of Students and Scholars and its Wageningen chapter, who were the organizer of this event, greatly appreciated the support provided by SHOT. Every player was also impressed and satisfied with the facilities and environment at SHOT.
Many Shot members were also at the event to support the home players. Johan, Cathy and Vicky provided great service and support at the bar.

There are no upcoming events.